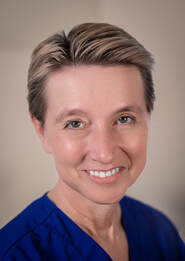 Dr. Carolyn Martin has a lot of accomplishments from what her husband  affectionately calls “her geek days.”  But these days she is most proud of her family.  Together they love to share experiences.  Traveling and appreciating the arts provide the most special occasions, but COVID19 taught them that playing board games and cooking together is just as memorable.  On a day-to-day basis they enjoy hiking, skiing, and dining as ways to savor the moments together.  On her own time Carolyn can be found staying fit with mountain biking, metabolic training and TRX, working puzzles, or in service to our community through Rotary and other projects.

Dr. Martin is so excited to bring Eye Boutique of Sedona to her extended family, her patients.  The practice is the culmination of experiences in different modes of practice and her knowledge of community needs.  She welcomes all feedback to help create the very best in eye care.

2004-05: Named one of “America’s Top Optometrists” by Consumers’ Research Council of America

2002-03: Named one of “America’s Top Optometrists” by Consumers’ Research Council of America

1998:  Fellow of the American Academy of Optometry

The University of Alabama at Birmingham Outstanding Woman Student Award

Silhouette Award for excellence in ophthalmic materials management and academics

Sub-investigator, Evaluation of the Clinical and Microbial Efficacy and Safety of 1.0% AzaSite Compared to 0.3% Tobramycin Ophthalmic Solution in the Treatment of Bacterial Conjunctivitis.  Insite Vision, Inc, 2004.